The ARGO service collects status results and computes daily and monthly availability (A) and reliability (R) metrics of distributed services. Both status results and A/R metrics are delivered through the ARGO Web UI, with the ability for a user to drill-down from the availability of a site to individual test results that contributed to the computed figure.

Availability - Defined as the ability of a service to fulfil its intended function at a specific time or over a calendar month.

Reliability - Defined as the ability of a service to fulfil its intended function at a specific time or over a calendar month, excluding scheduled maintenance periods.

ARGO is comprised of the following building blocks:

The definitions of entities (resources) are the following:

The following define the Metric and the Status, core building blocks of the algorithm used for A/R computations

These status values are mutually exclusive. The status of a resource can have only one value at a given point in time.

There are three (3) types of profiles used within each A/R computation:

For computations of A/R results the ARGO compute engine uses 288 discrete samples on the daily timeline. The quantization of 288 values has been selected because it corresponds to a sampling frequency of 5mins. (24h * 60 = 1440 mins / 288 = 5mins).

The compute engine performs computations on a daily base timeframe (even though the computations run per hour, actually ARGO performs the same daily computation with updated metric data).

The A/R results are produced by integrating status results according to metric, operations and aggregation profiles. So the compute engine needs to handle status results from metric data in an efficient way in order to algorithmically combine and integrate upon them. When the engine creates a daily timeline for a specific service endpoint and a specific metric it initiates a 288 item array reserved for the service endpoint and metric couple.

The engine then gathers all relevant daily data for the specific service endpoint and metric. For example imagine that for a given day 5 distinct metric data for the hostname foo.example.com, the service mysql.service and the metric mysql.some.metric. The data rows for that day will be of the following form:

Based on the timestamp and status fields the compute engine will map these data points to the correct indexes of the metric array:

Afterwards the compute engine will fill in the gaps appropriately, like so:

When the engine needs to combine several different timelines in order to produce an aggregated timeline result (for example for a specific service flavor), it does the following:

The end result is an aggregated timeline:

In all cases AND and OR operations are based on the Operations profile used.

It is important to note that the discrete handling of the status results as samples gives an easy and graceful way to implement aggregations.

Regarding status timelines and since there are no pre-established points in time shared by all timelines (like in sampling and A/R computations described above) the compute engine operates differently.

If for example the compute engine is given 3 continuous status timelines that need to be aggregated a new timeline for the aggregation is reserved.

and the compute engine slices the timeline accordingly

And iteratively fills up the gaps progressively based on the profiles used in the given computation.

Once the filling up is completed the compute engine stitches back the complete aggregated timeline, like in the picture below: 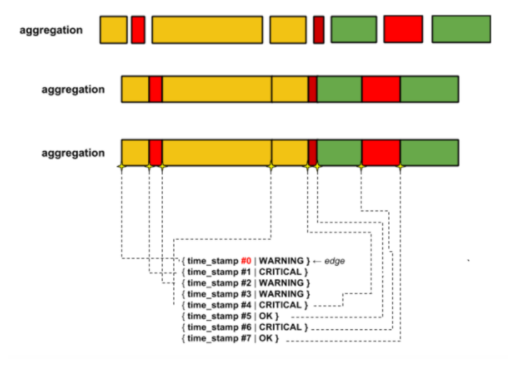 In the following subsections the metric and aggregation profiles used for each EGI report are given.

The operations profile used in all of the subsequent EGI reports are given in the tabulars here:

In the Sites A/R report the following metric profile is used:

The Aggregation profile used is the following one:

For the NGI level aggregation all A/R results for sites belonging to the NGI are collected and aggregated dynamically weighted based on the HEPSPEC factor for each site. Hence larger sites contribute more to the overall NGI A/R and smaller sites less.

To get results for a specific month one should replace YYYY and MM with the calendar year and month respectively, hence to obtain results for August 2015 the link should be formatted as follows: http://argo.egi.eu/lavoisier/ngi_reports?month=2015-08 .

The Aggregation profile used is the following one: