The IV of the ENVRI RM defines two main types of information objects: Data and Metadata. 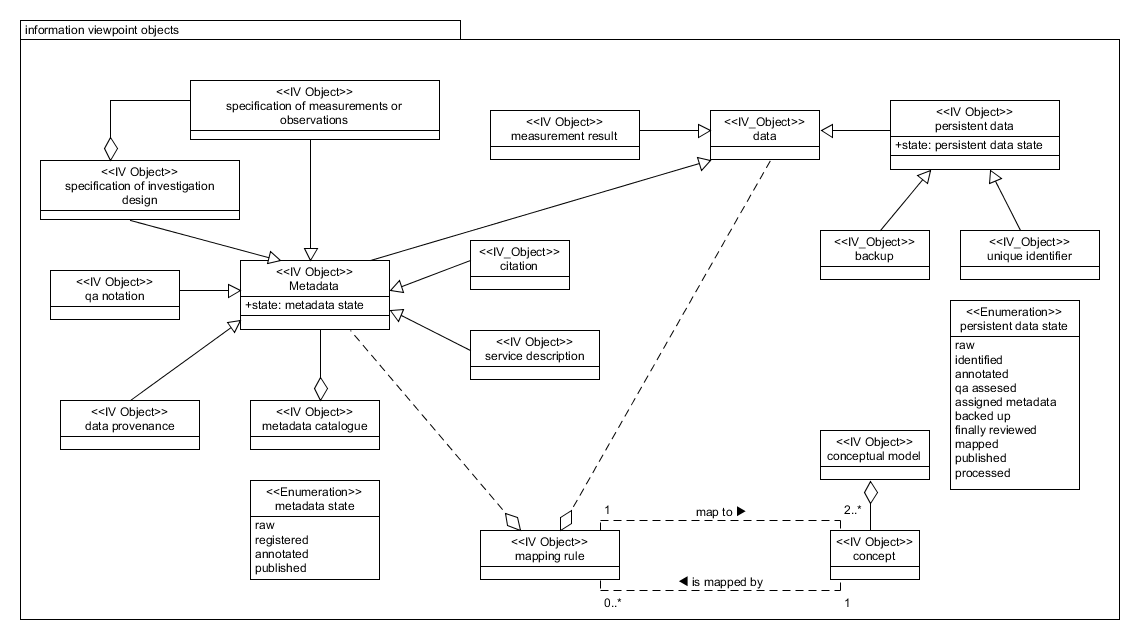 A copy of (persistent) data so it may be used to restore the original after a data loss event.

Mapping rules can be transformation rules for:

A published, resolvable, token linking to a persistent data object via an identifier.

In information technology terms, a citation is a reference to published data which may  include the information related to:

It is important that the citation is resolvable, which means that the identifiers point to live data sets and that the meaning of the items above are made clear.

A collection of concepts, their attributes and their relations. It can be unstructured or structured (e.g. glossary, thesaurus, ontology). Usually the description of a concept and/or a relation defines the concept in a human readable form. Conceptual models can also be represented in machine readable formats, for instance  RDFS or OWL. Those sentences can be used to construct a self description. It is common practice to provide both the human readable description and the machine readable description within the same system. In this sense, a conceptual model can also be seen as a collection of human and machine readable sentences. They can be local, developed within a project, or global, accepted and used by a wider community (such as GEMET or OBOE). Conceptual models can be used to annotate data (e.g. within a network of triple stores).

Metadata that traces the origins of data and records all state changes of data during their lifecycle and their movements between storages.

A creation of an entry into the data provenance records triggered by any actions typically contains:

Data about data, in scientific applications is used to describe, explain, locate, or make it easier to retrieve, use, or manage a data resource.

There have been numerous attempts to classify the various types of metadata. As one example, NISO (National Information Standards Organisation) distinguishes between three types of metadata based on their functionality: Descriptive metadata, which describes a resource for purposes, such as discovery and identification; Structural metadata, which indicates how compound objects are put together; and Administrative metadata, which provides information to help manage a resource. But this is not restrictive. Different applications may have different ways to classify their own metadata.

Metadata is generally encoded in a metadata schema which defines a set of metadata elements and the rules governing the use of metadata elements to describe a resource. The characteristics of metadata schema normally include: the number of elements, the name of each element, and the meaning of each element. The definition or meaning of the elements is the semantics of the schema, typically the descriptions of the location, physical attributes, type (i.e., text or image, map or model), and form (i.e., print copy, electronic file). The value of each metadata element is the content. Sometimes there are content rules and syntax rules. The content rules specify how content should be formulated, representation constraints for content, allowable content values and so on. And the syntax rules specify how the elements and their content should be encoded. Some popular syntaxes used in scientific applications include:

Such syntax encoding allows the metadata to be processed by a computer program.

Two aspects of metadata give rise to the complexity in management:

Metadata can be fused with the data. However, in many applications, such as a provenance system or a distributed satellite image annotation system, the metadata and data are often created and stored separately, as they may be generated by different users, in different computing processes, stored at different locations and in different types of storage. Often, there is more than one set of metadata related to a single data resource, e.g. when the existing metadata becomes insufficient, users may design new templates to make another metadata collection. Efficient software and tools are required to facilitate the management of the linkage between metadata and data. Such linkage relationship between metadata and data are vulnerable to failures in the processes that create and maintain them, and to failures in the systems that store their representations. It is important to devise methods that reduce these failures.

A collection of metadata, usually established to make the metadata available to a community. A metadata catalogue can be exposed through an access service.

metadata state is an object property that determines the set of all sequences of actions (or traces) in which the metadata object can participate, at a given instant in time (as defined in ODP, ISO/IEC 10746-2).

In their lifecycle, metadata may have the states described in the following table.

Data is the representations of information dealt with by information systems and users thereof (as defined in ODP, ISO/IEC 10746-2). Persistent Data denotes data that are persisted (stored for the long-term).

Persistent Data state is an object property that determines the set of all sequences of actions (or traces) in which the object can participate, at a given instant in time (as defined in ODP, ISO/IEC 10746-2). The persistent data states and their changes as effects of actions are illustrated as  IV States.

In their lifecycle, persistent data may have the states described in the following table.

The state 'raw' refers to data as received into the ICT elements of the research infrastructure. Some pre-processing may or may not have been carried out closer to where measurements and observations were made

These states are referential states. The instantiated chain of data lifecyle can be expressed in data provenance.

Notation of the result of a Quality Assessment. This notation can be a nominal value out of a classification system up to a comprehensive (machine readable) description of the whole QA process.

In practice, this can be:

QA notation can be seen as a special annotation. To allow sharing with other users, the QA notation should be unambiguously described so as to be understood by others or interpretable by software tools.

This is the background data needed to understand the overall goal of the measurement or observation. It could be the sampling design of observation stations, the network design, the description of the setup parameters (interval of measurements) and so on. It usually contains important data for the allowed evaluations of research results (e.g. the question of whether a sampling design was done randomly or by stratification determines which statistical methods can be applied).

Investigations (and hence measurement and observation results) need not be quantitative. They can also be qualitative results (like "healthy", "ill") or classifications (like assignments to biological taxa). It is important for data processing to know whether they are quantitative or qualitative.

The specification of investigation design can be seen as part of metadata or as part of the  Semantic Annotation. It is important that this description follows certain standards and it is desirable that the description is machine readable.

specification of measurements or observations

The description of the measurement/observation which specifies:

With reference to a given type of data, objects a unique identifier (UID) is any identifier which is guaranteed to be unique among all identifiers used for those type of objects and for a specific purpose.

There are 3 main generation strategies:

The above methods can be combined, hierarchically or singly, to create other generation schemes which guarantee uniqueness.

The critical issues of unique identifiers include but not limited to: