There are several options for promotional materials varying from the traditional pencils, memory sticks, key chains, and bags to something more unique like colouring book. If bought from normal suppliers, it can be hard to find something which is suitable for user. Ideally, these would be something which work both as attention getter (e.g. useful, fun, or interesting), but at the same time either represent the RI somehow, or have information content.

Advantages: Synergies with other methods. Often distributed in events and booths. Visibility for the RI and its brand.

Challenges: Difficulty of reaching new user groups (interest of taking the material). Design and choosing the product is crucial; as is the way they are distributed. There can also be limited information content.

ENVRI Coloring book: A coloring book introducing all the cooperating environmental research infrastructures has been developed within the ENVRIplus project. The idea is to introduce all the RIs and in the same time have there a coloring picture illustrating the specific field in which the RI operates. The colouring page describing the Atmospheric research infrastructures thus showed illustrations of clouds and balloons, an active volcano presented lithosphere, hydrology showed octopuses, waves and fish, etc. the illustrations were then, quite inconspicuously, accompanied by text describing and promoting the research infrastructures themselves. In order to design the book, the author needed the coloring pictures (vectorstock, approximately 50 €) and collect the text about the RIs. The costs for developing the material were therefore very minor. The major costs came from the printing and the crayons (with the project logo) that were distributed together with the coloring book. So far, about 2500 copies of the book were distributed 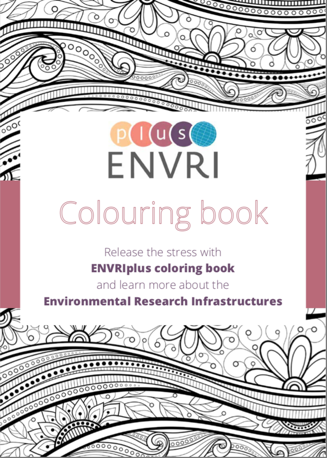