The ENVRI RM IV defines data state and metadata state as the set of attributes which determine the actions that can be performed over a given information object.

The state changes, together with the IV Information Action Types can be used to model the behaviour of data as it is managed by the RI.

The diagram below shows the states of three IV objects (Measurement Result, Persistent Data and Metadata) and their relationships. 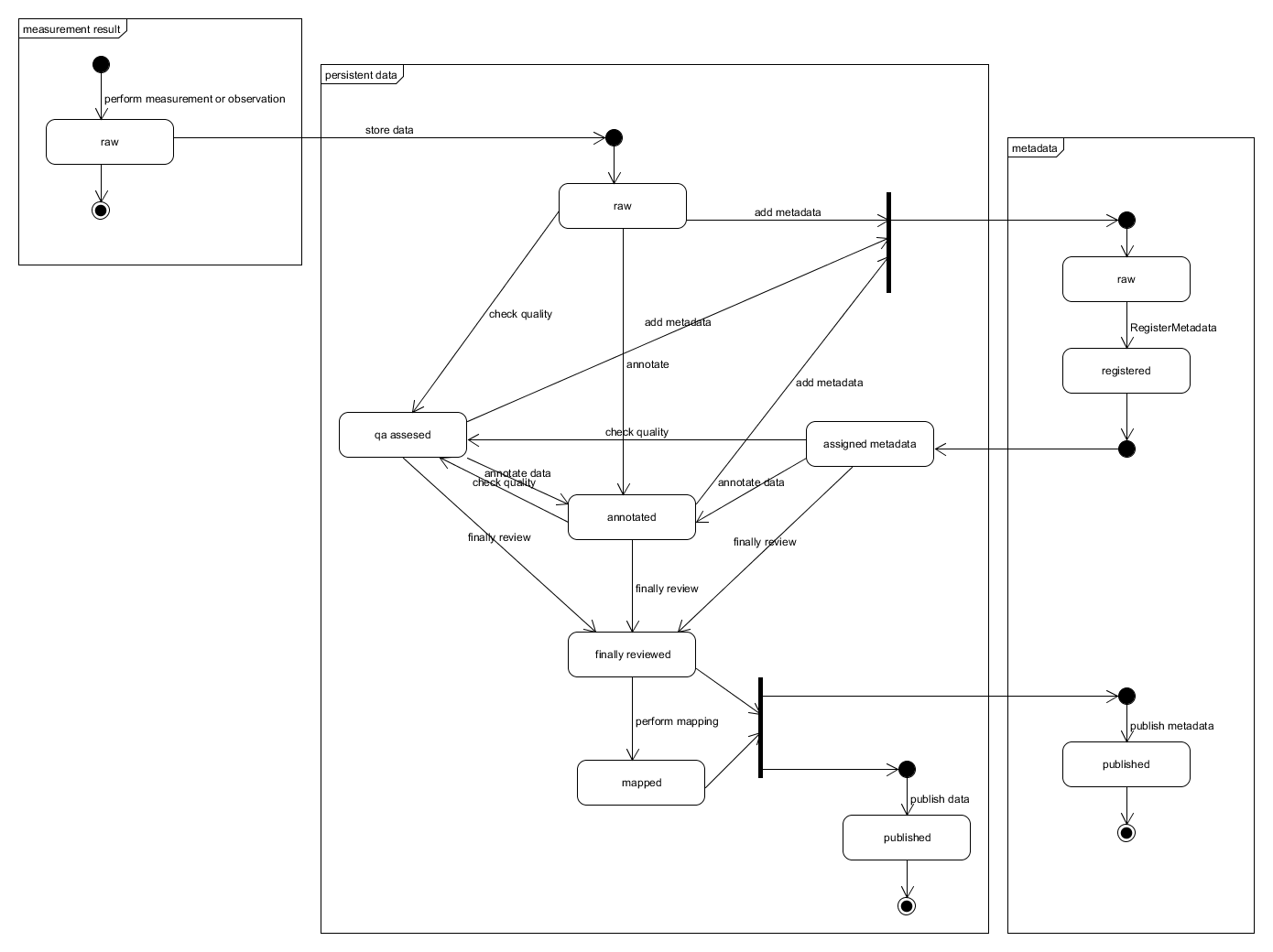 This diagram shows all the possible states for each of the IV Objects.

The second IV object (middle) is PersistentData object. The StoreData action triggers the creation of the new Persistent Data object in the RI which has a raw state. This object can have six states. The transitions shown in the figure indicate possible transitions which can occur during the lifetime of the object.

The third IV object (right) is a "Metadata" object. The AddMetadata action triggers the creation of the new Metadata object in the RI. This object can have three states. However, the transitions from registered to published is not directly triggered. The diagram indicates that publish metadata must occur simultaneously with publish data

The diagram shows the series of actions applied change the state of the IV object until it reaches a "published" state. In this diagram, only the persistent data object is shown. The diagram is linear and depicts contains only a subset of the allowed states and actions. This subset can vary from one RI to another. RIs can model their data lifecycles using state machine diagrams. The states described in the IV States diagram indicate a set of possible paths to follow when representing the data lifecycle. The instances developed by RIs may chose the states they need to include to represent their corresponding data lifecycles. RIs can also include additional states which help them better represent their data processing flows. 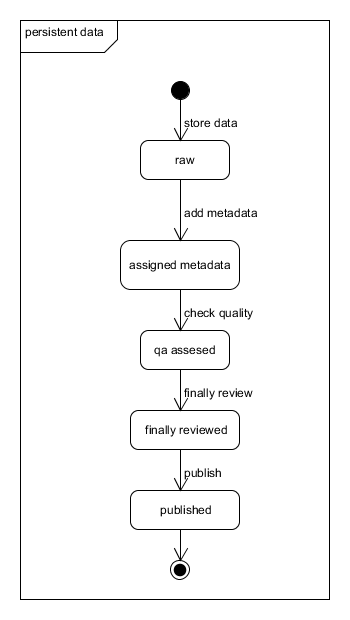 The diagram shows the lifecycles of five IV objects and the way in which they relate to each other. The example is more complex but it is still linear and easy to follow.

In this example, most of the states and actions are still subsets from the ones originally introduced on he IV State Diagram. The only exception is the backedup state. This is still valid, RIs can adapt the diagrams to their particular needs adding states and actions to better illustrate their data lifecycles as close to reality as possible. 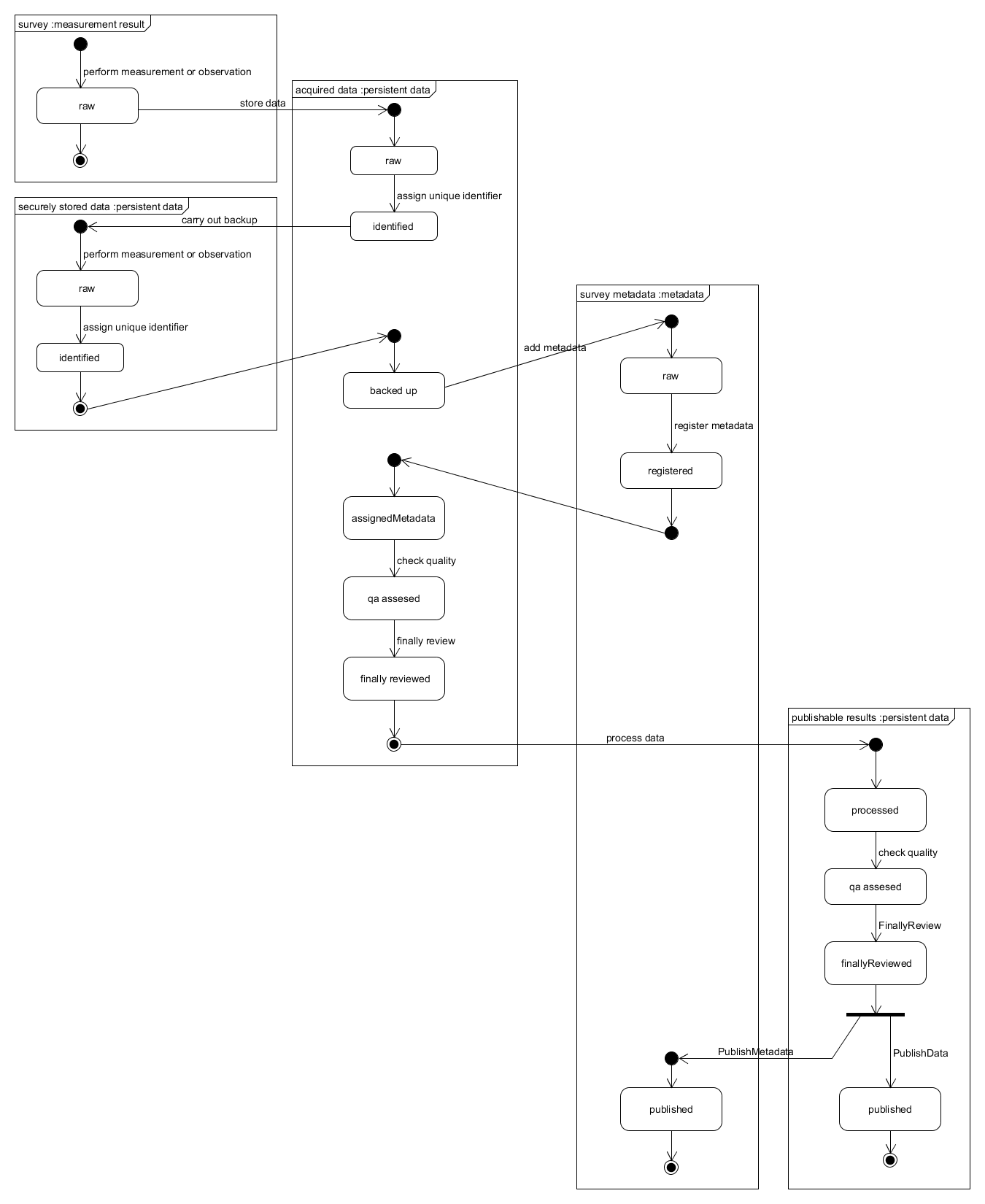